For the last eight years, I only missed Beeckestijnpop once. It is one of the things I look out for each year and it unofficially kicks off the festival season. In that eight years, I always dreamed of playing on that main stage and now that dream came true!

We played an awesome show and I saw a lot of people rocking out and a few others wearing an Against All Odds T-shirt! It felt great!

After our show, we got a call from 3voor12. A band that was scheduled to play a session, had to cancel, and they asked if we could come and play in their place. We didn't hesitate and got there as quickly as we could. We played two songs behind the Beeckestijn manor and in front of their camera as a crowd of about 40 people had gathered around us. So that was a nice surprise for us on top of the awesome day it already was!

Simultaneously with Beeckestijn, we released our promo for 2010 with two newly recorded songs. They can be listened to and downloaded from the music section on the Against All Odds website or from our Bandcamp page. 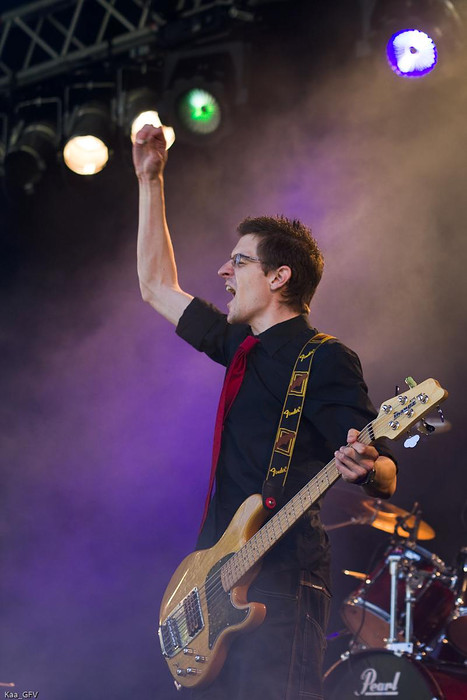 Wow, what an exciting weekend this was! Last Thursday we've played the IJmond Popprijs finals in a crowed Witte Theater in IJmuiden and the jury thought we were the best band of the evening. We've won three gigs: one at the Nozem en de Non, one at Wijkerpop and the main prize: a gig at the main stage of the Beeckestijn pop festival!

The day after was Queens day. We had a last-minute show at Café Briljant in Haarlem. Before we got there, we thought we would be playing in the corner of some kind of pub, but it turned out to be an awesome big stage on a square in front of a church where a lot of people were rocking out (probably because they were drunk ;) ).

We're going to take it easy this month, writing some new songs for the following gigs, next month at the BukBuk, Merv's and Beeckestijnpop!

I've made a minor change to the Music Importer. You are now able to keep the original files when restructuring them (ie copying them in stead of moving.) You can find and download the updated version on the Music Import software page.

The installation of Paddock is not quite intuitive. You need to rename some files, change some variables and add the table structures to the database by hand. I know this immediately scares off a lot of users, but hey, it was originally made for a friend of mine from the Dutch Racing League and I didn't think someone else would want to use it. :)

To help more people setup paddock, I've created a page for it with a FAQ! It explains all the issues that people mailed my about. If you still get stuck, please don't hesitate to mail me about your problem; I'd love to help!

Playing at the Nozem en de Non for the IJmond Popprijs with Against All Odds was a blast! We were selected to play as the last band and got the crowd rocking on their feet. The jury gave us an awesome report and we are going to the finals at het Witte Theater in IJmuiden! Check out the photos.

With the IJmond Popprijs finals at 29 april, this will be a busy month for us. Our first show is this friday at the Asgard in Beverwijk together with The Loss. The second is on saturday 24 april at the BukBuk in Heiloo with The Loss (again), Jude and Cellphyll. Be sure to check out at least one of the shows!