After my iPhone broke on me a few weeks ago, I bought an HTC Desire with Android 2.2. Of course, one of the first thing I had to do was download and play with the SDK.

After a few hello world applications I started on a game after the idea of my brother. He originally wanted me to create the game for the iPhone, but since you'd have to buy a Mac just to develop applications, it was a no-go.

The game is a 2D puzzle, where you slide rows or columns of tiles across the screen. Tiles that move through the edges of the screen appear on the opposite side, so it is a bit like a Rubik's cube. I've created three modes so far: level mode, random mode and picture mode.

In level mode, you need to play through a few predefined and increasingly difficult levels. In random mode, a random level is generated. Picture mode is similar to random mode, but you can play with a picture selected from your photo album!

Developing applications for Android is a bit weird when you're used to developing PHP scripts and windows applications, but I got used to it very quickly as everything seems quite logical. Google did a great job at documenting everything and also, stackoverflow helped a bit here and there.

When I feel the game is done, I'll upload it to the Android market, probably for free - I'm not sure yet. Anyway, let me know what you think about it! (screenshots) 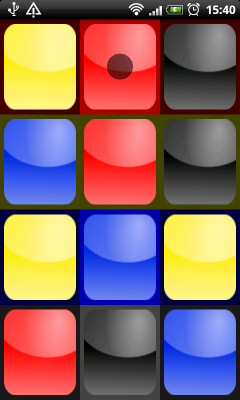