We've had a few moments of spare time to work on Smash Battle again. As Jeroen created a new snow/ice theme for the levels, I went on and made a beginning of the single player portion.

The single player missions can now be created from our level editor and they can be played within the game. The only problem is, that we still only have one enemy, a small chick which you can stomp on. So the next thing we should do is make some more enemies and figure out what we want them to do. Then we'll be able to design some more levels and we might just get a beta version out!

While you wait for this beta version, check out the photos of an arcade cabinet running Smash Battle on our screenshots section! 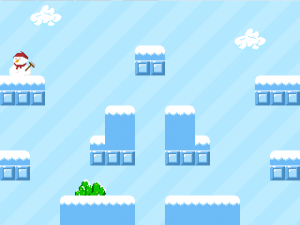 « Worst gig in a long time...
Against All Odds to play in Lokaal tonight »